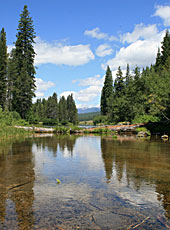 Upper Klamath Lake, a high desert lake, is located in the southern most part of the state of Oregon, at an elevation of 4100 feet above sea level. The lake is protected to the northwest by the Cascade Mountains with an arid sagebrush steppe to the east and south. Klamath Lake has a surface area of about 140 square miles and has an average depth of 8 feet. The lake is fed by 17 mineral-rich rivers that deposit an average of 50,000 tons of mineral-rich silt from the surrounding 4000 square mile volcanic basin, making Upper Klamath Lake one of the richest nutrient traps in the world, impossible to artificially to duplicate. The lake waters and its sediments have an astonishingly high mineral and trace element concentration due to a massive volcanic eruption that occurred from Mount Mazama over 7700 years ago. The event covered the area with millions of tons of mineral ash as far as the Canadian border. Crater Lake, to the north, is what is left of this eruption. The regions volcanic legacy is associated with “The Pacific Ring of Fire,” a geologically active region that experiences large-scale volcanic, tectonic, and glacial events. The volcanoes, earthquakes, and crumpled mountain chains, that border the Pacific, are the result of buckling edges of great plates of the Earth’s crust under compression.

Upper Klamath Lake is free of adverse bacteria, heavy metals, pesticides, herbicides, insecticides and fungicides. The lake receives an average 300 days of sunlight per year which provides a perfect growing environment for the world’s richest strain of wild AFA blue-green algae, scientifically known as Aphanizomenon flos-aquae. The alkaline lake water provides more than 60 times the nutrients needed for the algae to grow to its full potential each year. Under the right conditions, AFA algae can reproduce every 20 minutes, which provides a plentiful abundance of this organic, high life-force, miracle super food.

The Ecosystem of AFA

1. Once cashews have soaked for at least 4 hours, or overnight in the refrigerator, drain and rinse well.
2. Blend all ingredients in high-speed blender for 1-2 minutes until well blended. Store in refrigerator in airtight bottle or mason jar. Mylk will keep for 3-4 days.

1. Put 2 of the peaches in either a food processor or blender to puree.
2. Dice 1 peach into 1⁄4" cubes.
3. Combine all ingredients in big bowl. You can put into a cylinder mold of desired shape and sprinkle almond and cinnamon on top.
4. Garnish top with peach slices. Makes 4 servings.

​*how to: ground almonds

2 quarts or more unpasteurized organic raw almonds
1. Soak almonds overnight in filtered water.
2. Drain and put on dehydrator trays for 24-36 hours until dry.
3. Store in airtight container and use as needed for recipes.
4. Skip the soaking and dehydrating if you don't have a dehydrator.

**how to: date paste

Blend all ingredients together and in a high speed blender and serve.

*To make almond & brazil nut milk place a 1/3 cup mix of almonds and brazil nuts into a high speed blender with 1 cup of water and blend. Strain through a nut milk bag or strainer.

**For frozen bananas - peel them and place in a ziplock bag overnight.

1. Blend all ingredients together in a food processor until they form a dough. Add a little more agave or some almond milk if the mixture is too thick.
2. Line a dehydrator sheet with Teflex and scoop the macaroons out by round tablespoons onto the sheet. Dehydrate at 115 degrees for 6 hours, or until macaroons hold together well but are still a little soft. Enjoy!​

To add a chocolate drizzle or to dip the bottoms of your cookies use the following recipe:
1/4 Cup Cacao Powder
3 Tbsp. Maple Syrup
2 Tbsp. Warmed Coconut Oil

Combine all ingredients and use to decorate the cookies.

Blend all ingredients until desired consistency, add more water (or ice) as needed to get an ice cream thickness.

1. In a food processor combine the almonds and dates. Process until sticky.
2. Pack this mixture into a 9 inch pie plate.
3. In a bowl combine the rest of the ingredients except the coconut. With your hand lightly mash the ingredients.
4. Add 1/2 of the shredded coco and mix with banana mash. Be careful not to over mix. It should be chunky.
5. Put the banana mixture into the pie crust and evenly spread out.
6. Top with the remaining coconut and garnish with fresh blueberries. Eat immediately.​

Make Crust
1. Put almonds in bowl and mix with date paste using a fork.
2. After thoroughly mixed, put in a 9” pie pan (preferably one with removable bottom). Line the pan with a thin layer of crust using your hands.

Make Filling
1. Peel 11 apples. Shred 7 of the apples, using the coarse side of cheese grater. Squeeze out as much juice as possible, leaving apples as dry as possible. Set aside 1 cup of shredded apples and put remainder into mixing bowl.
2. Thinly slice 3⁄4 of an apple and cut slices into 1⁄2” squares. Put remaining 1⁄4 apple into food processor with 3 chopped apples, date paste and blueberries (except for 15-20 of smallest blueberries which you set aside). Process thoroughly then add 1 cup shredded apples you set aside and process again.
3. Put all ingredients including 15-20 smallest blueberries in mixing bowl with remaining shredded apples. Stir and fill piecrust.
4. Refrigerate for 1⁄2 hour, remove pie from pan. Sprinkle almond crumbs, then cinnamon on top of pie. Cut into 8 pieces.

*How to ground almonds:
- 2 quarts or more unpasteurized organic raw almonds
Soak almonds overnight in filtered water. Drain and put on dehydrator trays for 24-36 hours until dry. Store in airtight container and use as needed for recipes. Skip the soaking and dehydrating if you don't have a dehydrator.

**How to date paste:
- 25 Medjool dates
Pit dates and soak for 1⁄2 hour. Drain and put in food processor. Blend until smooth with no chunks (may need to add water if too thick). Store in fridge.